Rewilding – What happens if we reintroduce something that was missing?

By Luke SummersFebruary 10, 2015Health and Fitness

Last year I was introduced to TED, talks by Chris and Gary from Anatomy in Motion. To put it simply, TED talks are awesome! If you haven’t seen them before, I highly recommend you check them out.

One of the TED talks that resonates most with me is on ‘Rewilding’.

So what in the world is rewilding?

A quick Google search of ‘rewilding’ returned the sentence “the return of habitats to a natural state”. So how does this apply to us? Well think about this, what if that habitat was your body? After all, we do live in our bodies.

All of a sudden this concept becomes extremely important. The simple fact is we have evolved more in the last thousand years than we have done in the last 200,000 years! And if you think about it, in the last hundred years the world (especially the west) has changed almost beyond recognition.

Evolution isn’t designed for such rapid change. Positive adaptation takes place over time. So as we continue to live our lives in a way that’s completely removed from how we spent thousands of years evolving, there are always going to be negative adaptations that occur.

In my opinion nature usually knows best. If we spent thousands of years evolving something, it was probably for good reason. Take the foot for example, it’s uniquely designed to be both a mobile adapter (when pronating), but also a rigid leaver (when supinating). This became essential when we started walking on two feet, as we needed ways to adapt for being less stable.

The mobile adaptive aspect (pronation) of the foot helps us adapt to the type of ground we’re walking on. In essence, the foot is inherently designed to walk on different surfaces, most of which would have been uneven. 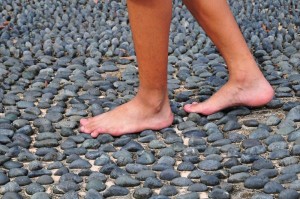 So where’s all this going? Well, if you spend 90% of your life on flat surfaces (as I’m sure most of you do) the need for mobile adaption of the feet is decreased. Add in to this mix footwear, which I will remind you is not a part of evolution, and you often get a dysfunctional foot that is completely disconnected from what nature actually intended.

So if our current lifestyle is causing the foot’s function to change, do we still need a foot to function in the ‘natural’ way?

Look deeper than simply the foot’s function. The real question is ‘What happens to the rest of the body if natural foot function changes?’ That’s the holy grail of questions which Gary Ward has done a fantastic job of answering in his book ‘What the Foot?’

If the foot no longer pronates because it has no reason to, or can’t (could also be due to previous injuries like sprained ankles, or orthotics / anti-pronation shoes, or a foot that’s simply stuck in a pronated position), can this affect the neck, the hip or back? You bet it can! It’s the domino effect that occurs when you remove something that was meant to be there.

When you pronate the foot (as seen in the suspension phase of gait) it has a direct influence on every single joint and soft tissue structure above it!

So bringing this back to rewilding

One of the main concepts of Anatomy in Motion is ‘Give the body back what’s missing’.

If you put back something that’s essential to keep your ecosystem (your body) running, the domino effect is potentially huge. That’s rewilding. I highly recommend you watch the video, it really changed my perception on lots of things.

As always, the choice is yours.

Luke is a co-founder / director of Kinect Health & Performance. His passion for helping people overcome pain and injuries has led to the development of the Kinect Health System. A unique approach to helping people move better, feel better, perform better and live pain free!

Intrinsic foot strength, do we need it?

Intrinsic foot strength, do we need it?

Get in touch today